After nearly twenty years of pest control in this piece of forest we see and hear a noticeable increase in bird life. Tui, bellbird, tomtit, silvereye, grey warbler, kingfisher, shining cuckoo, fantail and morepork numbers all seem to have benefitted. However, it is sobering to imagine what we might have experienced when the largest trees in this forest were mere saplings. Prior to the arrival of humans, and rats and mustelids in particular, the forest was an astonishing place.
Deep in the forest we might have come across the two metre high Giant Moa stretching even higher to graze the vegetation. We might have caught a glimpse of a Little Bush Moa as it scurried into the dense ferns and scrub to escape the eagle eye of a circling Forbes' Harrier.
Another possible predator would have been the flightless Adzebill, a very large, grey Takahe-like bird with a huge bill. This may have been searching for young seabirds in their nesting burrows below the higher peaks and ridges. 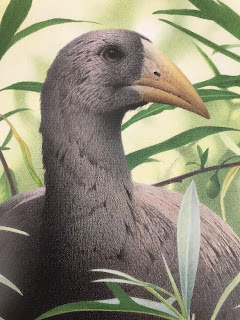 Another flightless and possibly nocturnal small rail-like bird, the Snipe rail could also have been feeding amongst the forest litter.

At night calling morepork would have shared the rocky crags and larger rotten trees with another owl, the much larger Laughing Owl or Whekau. The naturalist Thomas Potts commented that "If its cry resembles laughter at all, it is the uncontrollable outburst, the convulsive shout of insanity". The Whekau spent a lot of time on the ground hunting native bats that fed in the forest litter. 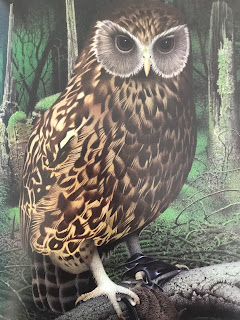 An unusual nocturnal resident may have been the New Zealand owlet-nightjar which was virtually flightless and also spent time hunting insects on the forest floor.

In addition to all our native song birds today we would have seen and heard many of the rare endemics now restricted to predator free islands and fenced reserves. As well as all these, we could have seen two species of flightless wren searching the forest floor for insects - the Bush wren or Matuhi and the Stout-legged wren.
Finally, Huia and North Island piopio would join the chorus of Kokako, Saddleback, Robin and Stitchbird.
Much of this has gone forever. It is our responsibility to do everything we can to protect the remnant that is left - it is all we have got and it is doubly precious as a result.

Information on these species has been drawn from "Extinct Birds of New Zealand" by Alan Tennyson and Paul Martinson published by Te Papa Press.
Posted by Allan Rackham at 20:37