It has been a frustrating spring. Just when the weather appears to be improving there is another wintery blast from the far south. The few still warm days have been glorious but they do seem to have been few and far between.
This year we have had high pest numbers to contend with. Rat numbers were exceptionally high in our pre-control monitoring. This followed a major seed drop earlier in the year. In the past month or so several stoats, a weasel and two ferrets have been trapped. More rabbits have appeared on the un-forested parts of the estate and these may have attracted the ferrets. Our pest control contractor has been working on the possums and rats and I have recently seen young bellbird and tui, so some birds have successfully raised a first brood.

This has been an exceptional year for seeds and flowering in the forest. At present, Quintinia is looking impressive and white rata are in full flower. 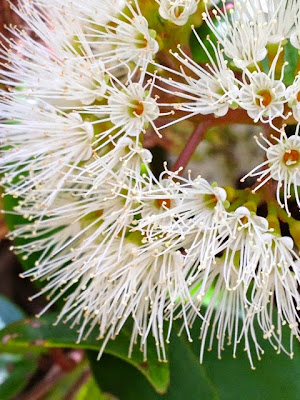 A strange phenomenon has been the shedding of leaves by many Lancewoods – a common small tree throughout the estate. They had an impressive flowering and the flocks of kereru and tuis then targeted their clusters of berries. At first, I assumed the carpets of leaves below the trees to be collateral damage from the kereru and perhaps possums. However, many trees have now lost all their leaves. In the last couple of weeks some completely denuded trees have begun to put on new growth so I am hopeful that this may be a natural phenomenon and that many will recover.  Olearia rani  plants, that escaped the catastrophic dieback after its phenomenal flowering two years ago, are now looking reasonably healthy, so maybe these major diebacks are just a part of the forest ecology.
Several people have commented how the bush seems to be less dense than it was. From our near ground human perspective the adjacent forest does seem to have opened up but I think that this is simply the forest moving towards maturity.
So far this year I have completed sixty-four 5 minute bird counts within the estate. This is the only way of providing a direct comparison of the bird numbers year on year. Numbers of all the native species appear to be consistent with previous years. This year I first heard Shining Cuckoo on the estate on the 18th September – nine days earlier than last year. As with last year a kiwi called near the house in late September. It is difficult to know whether this is a consequence of kiwis moving within the estate or simply reflects the warmer evenings and the fact that we spend more time on the decks. Sara and Rogier recorded Kaka on the upper estate most evenings for a period in spring.
The most exciting and unusual bird record on the estate was seen and photographed by Jude Hooson.  In misty conditions a Diving Petrel was attracted to the house lights at night. Jude was able to photograph it as it fluttered around on the deck. Unfortunately the mobile phone photograph at night through the ranch slider is not clear enough to reproduce here, but is just adequate for identification purposes! The Common Diving Petrel (kuaka) is a small seabird (20cm) which breeds off the NZ east coast including the Mercury Islands and spends most of its time in adjacent waters. It is the most aquatic of all petrels. It flies with a whirring flight close to the surface of the sea. Strangely, Jude said it appeared to be attracted to the moths fluttering against the window. This was probably a response to their movement not as a source of food. Diving Petrels feed mostly on small krill and copepods, swimming underwater using their wings and legs for propulsion. A fascinating record for the estate! It just shows that almost anything can turn up. It also reinforces the importance of taking photographs. Had Jude told me she had watched a Diving Petrel chasing moths on her deck 475metres above sea level I would have suggested she should be certified! With photographic evidence, Jude has made a most extraordinary ornithological record.