This Hochstetter's frog was half the size of a little fingernail 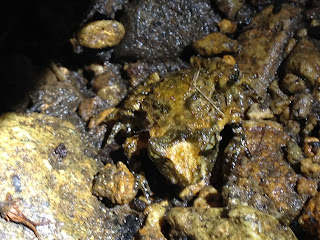 It took John coming up to Mahakirau to camp out at lot 9 to really break the drought (more than 150mm in 24 hours)! This followed 14 weeks during which we had little more than 100mm. Some shrubs have suffered quite badly in the prolonged dry spell and we have lost several Olearia plants after their phenomenal flowering earlier this summer.
At the moment there are numerous climbing rata still flowering which are proving very attractive to Bellbird. It has been a fantastic period for bellbird song. At times they have been deafening around the house and are still putting on a show now. Tui are not so apparent as earlier in the year when they seemed to be everywhere but they are first-up in the dawn chorus and numbers suggest that they have also had a good breeding season. Kereru are less apparent than earlier in the summer when they were very visible. Often four or five would be in the trees behind the house. It is difficult to gauge whether they have left the estate or are just keeping a low profile.
All of the commoner bush birds have been very active over the warm, still period. Silvereye are currently in large flocks of more than twenty birds and at times the forest has been teeming with them. Fantail and Grey Warbler have also been very evident whereas recently I have only seen or heard the occasional Tomtit and Kingfisher - but they are around. Individual Kaka have flown over the estate and I have heard them at night - presumably returning to the Manaia. We saw a flock of more than six birds in the sanctuary during March. Morepork numbers seem to be high and on one still, warm night I believe that I could hear from the house more than a dozen different birds.
A highlight of the past two months has been male kiwi calling below Bruno and Barbara's and near the estate road at Sebastian and Karen's. Hopefully, we will record female kiwi this winter. 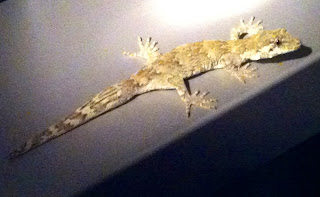 Tim and Jude found this Forest Gecko (Hoplodactylus granulatus) at their house - as far as I know the first record on the estate for many years. They grow up to 17cms and live in holes in tree trunks and under bark. Their cryptic colouring makes them very difficult to see in the bush. Rats love them so it would be fantastic to think that the pest control programme could help this species to flourish on the estate.
On the butterfly front I have recorded a few Monarch and Blues and a single Red Admiral. The commonest butterfly on the estate is the White. There have been two different species of dragonfly around the house.
Finally, the local newspaper reported the discovery of a flowering wood rose (Dactylanthus taylorii) somewhere on the peninsula. It is New Zealand's only totally parasitic flowering plant and lives on the roots of hardwoods such as mahoe, lancewood and fivefinger - all of which are common on the estate. It flowers between January and May and is pollinated by the short-tailed bat. This was only the second record in one hundred years. Nonetheless we will keep looking. You never know...
Posted by Allan Rackham at 23:06

Email ThisBlogThis!Share to TwitterShare to FacebookShare to Pinterest
Labels: This Hochstetter's frog was half the size of a little fingernail